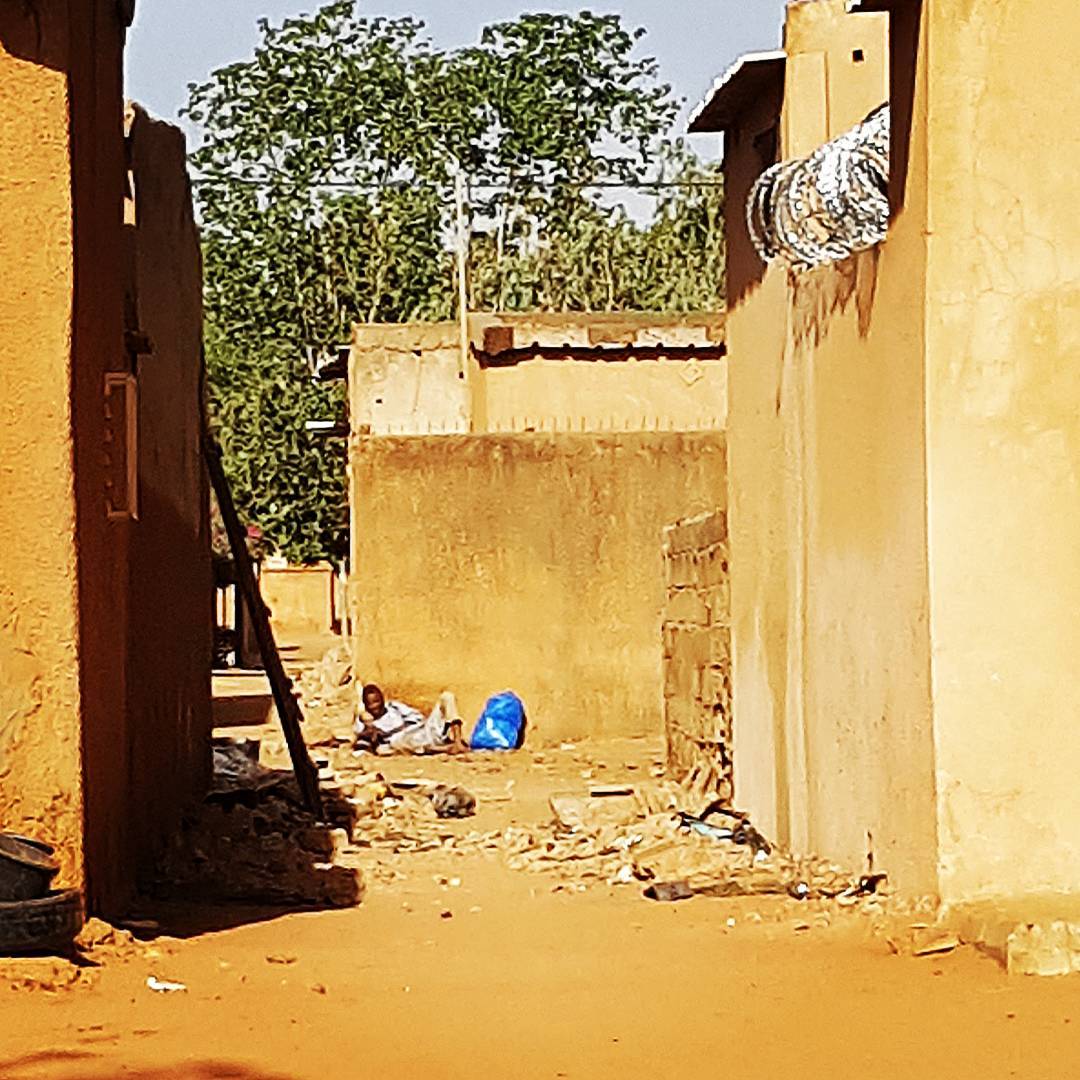 This homeless man sits in front of a bright yellow bourgeois mansion, always in the sun, in one of my favorite back alleys of Niamey. Mid-afternoon, when temperatures climb over 120 degrees, I ask him if he would not prefer to rest in the shade.  His reply, “no, the sun is good for me”. He spends his day listening to the radio or reading a newspaper.  He speaks impeccable French, and never begs.  Consequently, I haven’t offered anything, for fear of humiliating him. We chat and I return to my walking.

I’ve pondered about what has brought him to homelessness, in a country where, no matter how poor you are, you have a family that will care for you and feed you.  He seems unlike most of “Niamey’s brown men”, as I call them.  The homeless in Niamey are commonly completely brown… that’s how I recognize them as homeless. Their clothes are brown, their skin is brown, and their hair is brown. Brown, because they are covered from head to toe with soiled sand; they blend right in with the brown streets and weathered concession walls. Most homeless are foreigners, often refugees or migrants from distant African countries, and have somehow found their way to Niamey… like the man I met years ago while driving from Niamey to Agadez.  He was walking along a long stretch of empty savannah. He waved at me to stop, and so I did. He asked for water and food, and I gave him a little. I offered him a ride – he looked terribly exhausted and malnourished — but he declined.  He was heading in the opposite direction, to Niamey.  His plan was to rest there a while before walking many months more until he reached Paris, France. The journey did not frighten him; he had already traversed wide expanses of three countries, having left Cameroon months ago. He was homeless but not unhappy. He had a plan.

I wonder how the brown man in my photo landed in front of the big yellow house. What is his story? I dare not ask him.  Instead, my ponderings have led me to invent his past, as the foundation of my most recent short story.

(Adapted from my essay “Aristotle of Africa” in “The Walkabout Chronicles: Epic Journeys by Foot“)