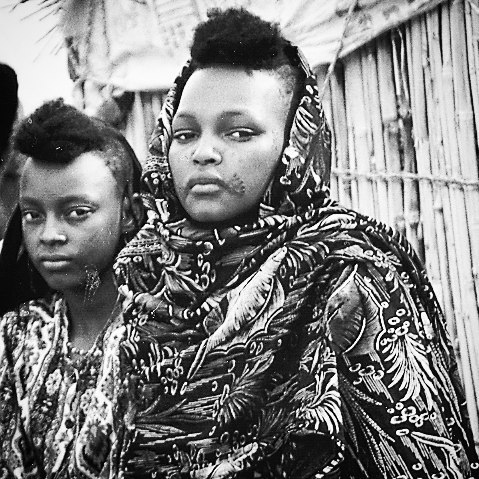 GOTCHI AND SATCHI: (part nine, short story continued) After almost a month squatting in the mosquito-infested market, Binta abruptly announced, “It’s time for us to leave.  Now we will go to the villages to sell our medicines there.” Binta omitted to inform her that during the late moments of the night, strangers often troubled her, asking for favors she did not care to offer.  She had begun fearing for their safety.

With their belongings on their heads, Gotchi and her mother walked along the busy roads. They finally found a bush taxi – a minivan meant for eight, packed with fifteen people and sheep tied to the roof – that would take them where they wanted to go.  Gotchi could hardly breathe and thought she would faint, squeezed in tighter than a sardine.  Finally, after several hours, the taxi dropped them off on a sandy path.

Gotchi and her mother walked for hours until they reached a large village of thatched huts hidden behind stalk fences. Soon, she remarked, the sun would begin to set. Women carried buckets of water on their heads that they had filled at the village well.  Children of all ages played in the dirt streets. “Tomorrow, we will go from door to door to sell our medicines,” Binta declared.

She obtained permission from the village chief to sleep in the thatched hut set aside for visitors. Encouraged by his kindness, she shyly asked, “May we have some water to bathe with? We have not showered in a very long time.” That night the chief’s wife brought them a large bucket of muddied water to wash with, and a hot meal of millet with fresh frothy milk. They felt a new hope in their hearts.

The following morning, Gotchi and Binta went from gate to gate, selling their herbs, remedies and love potions to the villagers. When they had tried their luck at every home, they walked miles to the next village. They repeated this routine, day in and day out. On good nights, they found a friendly family that lent them a safe place to sleep and gave them a hot meal to enjoy. On other nights, they simply laid their mat on the sand, falling asleep under the brightly illuminated desert sky.