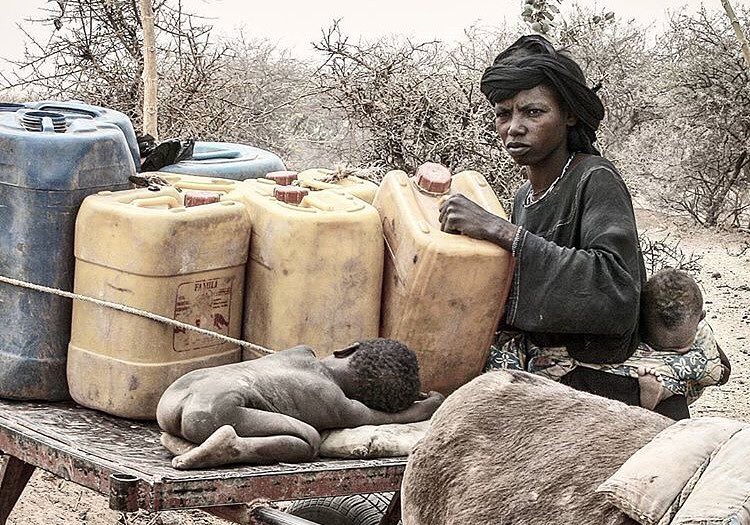 JUST ONE MORE DAY (fourth set in the Water Searchers series):
This woman had been waiting hours for her turn at a well over 120 meters deep.  Both of her children, exhausted by the wait and heat, took a nap: the baby on her back, and the elder of the two on her donkey cart.  She had traveled close to 20 miles earlier that morning, sent by many of her family members, to carry out the water chore.  This interminable waiting was not unusual. In fact, she had expected it.  All she hoped was that the well would not run dry before her turn came.  She did not wish to camp overnight at the well.  Sometimes that happened, when the deep well was overexploited and it took many hours for water to seep back through the earth.  Sometimes the well owners had to drop a boy or man deep in the well to dig deeper, which could speed up the process.  This was always a dangerous and scary process; the men or boys could lose their lives if the well caved in on them.

The woman’s jerry cans were completely empty.  She hadn’t brought enough food, and the three water searchers were getting hungry and thirsty in the scorching heat.  It was well over 40 degrees celsius and climbing.  She was also concerned about her family members that remained at home. What would they cook with or drink if she did not return quickly?  She sighed, this was just another exhausting day, not unlike many she had spent before, and not unlike many she would have in the future.  A day of hoping that she and her kids would make it to the next.