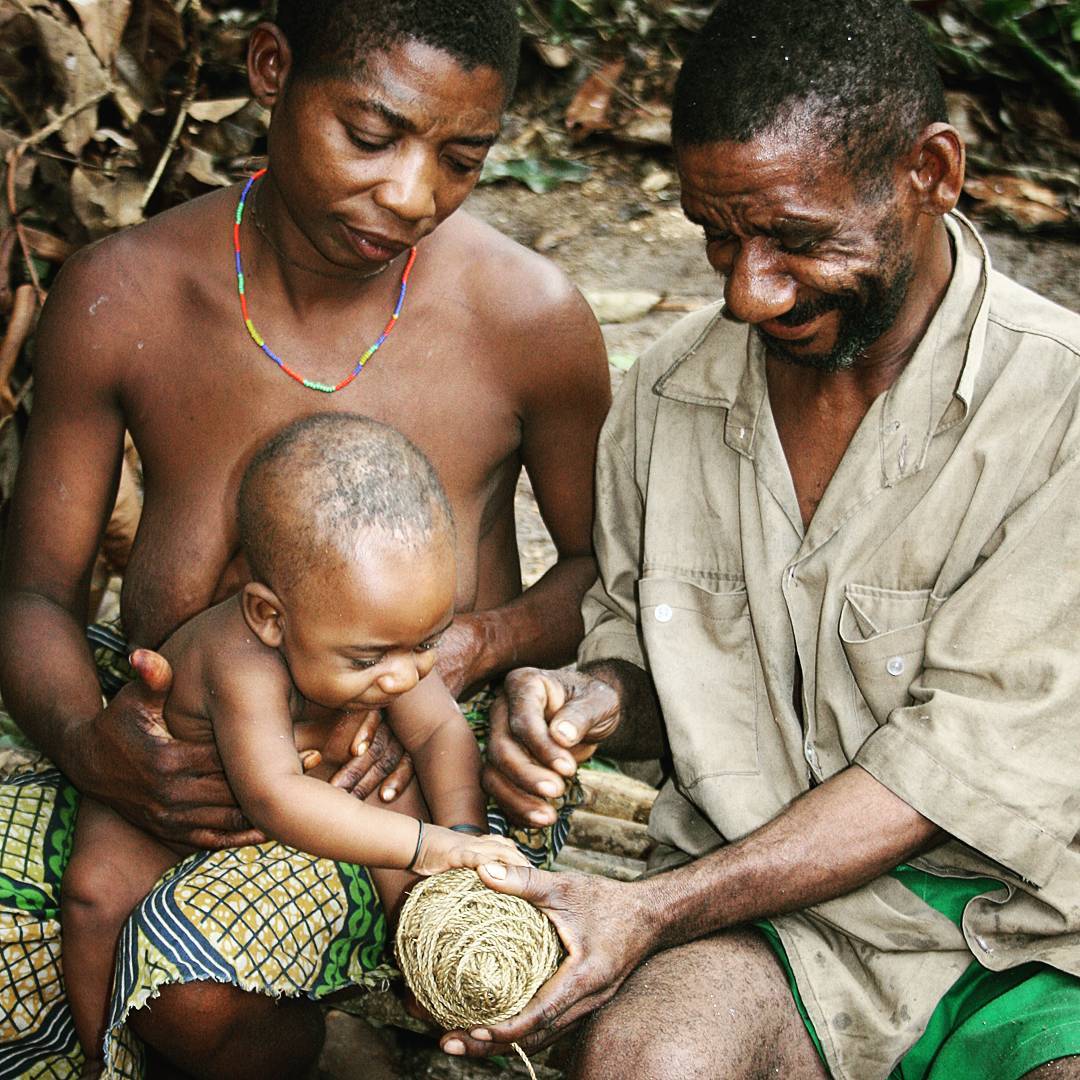 NDIMA, THE FOREST: Ndima, a BaAka pygmy, sits with his wife and child, who plays with a chord that Ndima just finished making.  The rope will be used to make a traditional hunting net. Ndima, whose name means “the forest”, was very special to me. True to his name, he incarnated the forest and was a true master of the jungle. He knew it’s every secret.

To honor him and the Central African Rainforest… and also because I cannot think of a more beautiful name, Denis and I named our daughter “Ndima” (although we spell it Indima). With Ndima and his pygmy community, we traversed the Central African Jungle, enjoying its many treasures.  One day, we partook in a net hunt with the men and women.

They united all the nets of the community to make a large semicircle through the jungle understory.  Then a group of the pygmies made loud noises to scare wild game into the net.  The group grew very excited when a baby and mother duiker ran our way.  But at the last moment, the mother escaped.  Ndima yelled out, “there’s my meat running away!” He seemed desperate.  I smiled, secretly thrilled his “meat” was saved.  Alas, the baby’s fate was for the BaAka’s evening stew.

The following day, Ndima took us honey hunting.  We walked for hours looking for a hive.  On the way, Ndima showed us tree bark that was used as perfume, and leaves and plants that were used for medicine.  We picked paillou (a jungle nut) and koko (a vine leaf used in their sauce). At one point, Ndima spotted dust on the ground, dust that was imperceptible to me… low and behold, 50 meters up higher lay a swarming beehive.

While this bee hunting adventure will be saved for another post, needless to say, I could not believe how skilfully Ndima climbed up the tree to the beehive, and scooped out kilos of honey.  I was drunk on honey the rest of the day; I experienced such a sugar high that I struggled walking back to camp.  That night, Denis played drums with the rest of the group.  Ndima and other men danced, as our camp was visited by forest spirits.